Here we are picking up 老老爺 once again.

I was so glad that we made the last minute decision to come back to Pingdu to see Wypoh's village.

老老爺 sat in the front seat and took us back out to the main road and onto a dirt road about fifteen minutes out. We were surrounded by corn fields and could SEE the village from afar. But we couldn't GET to it without driving down even more narrow paths - in between corn stalks! - which Johnny did not want to do.

This was a company car, after all, and I was thinking the same thing he was... not a good idea!

So 老老爺 got out of the car to talk to a farmer walking in front of us with a herd of LAMB in tow. It was a scene straight out of an Indiana Jones movie! He told us to go back out to the main strip and drive further down to get to the entrance. Just turning the car around was difficult, as we could have easily fallen into the ditch!

The above video was taken on the road leading into Wypoh's village. Once we arrived, Johnny found a spot and pulled over while 老老爺 got out to speak with another farmer. He too was standing in the middle of the road. Such is life in the hinterlands of China, I guess!

They talked for quite awhile, prompting the rest of us to get out and join them while Johnny stayed with the car.

老老爺 must have discovered something. 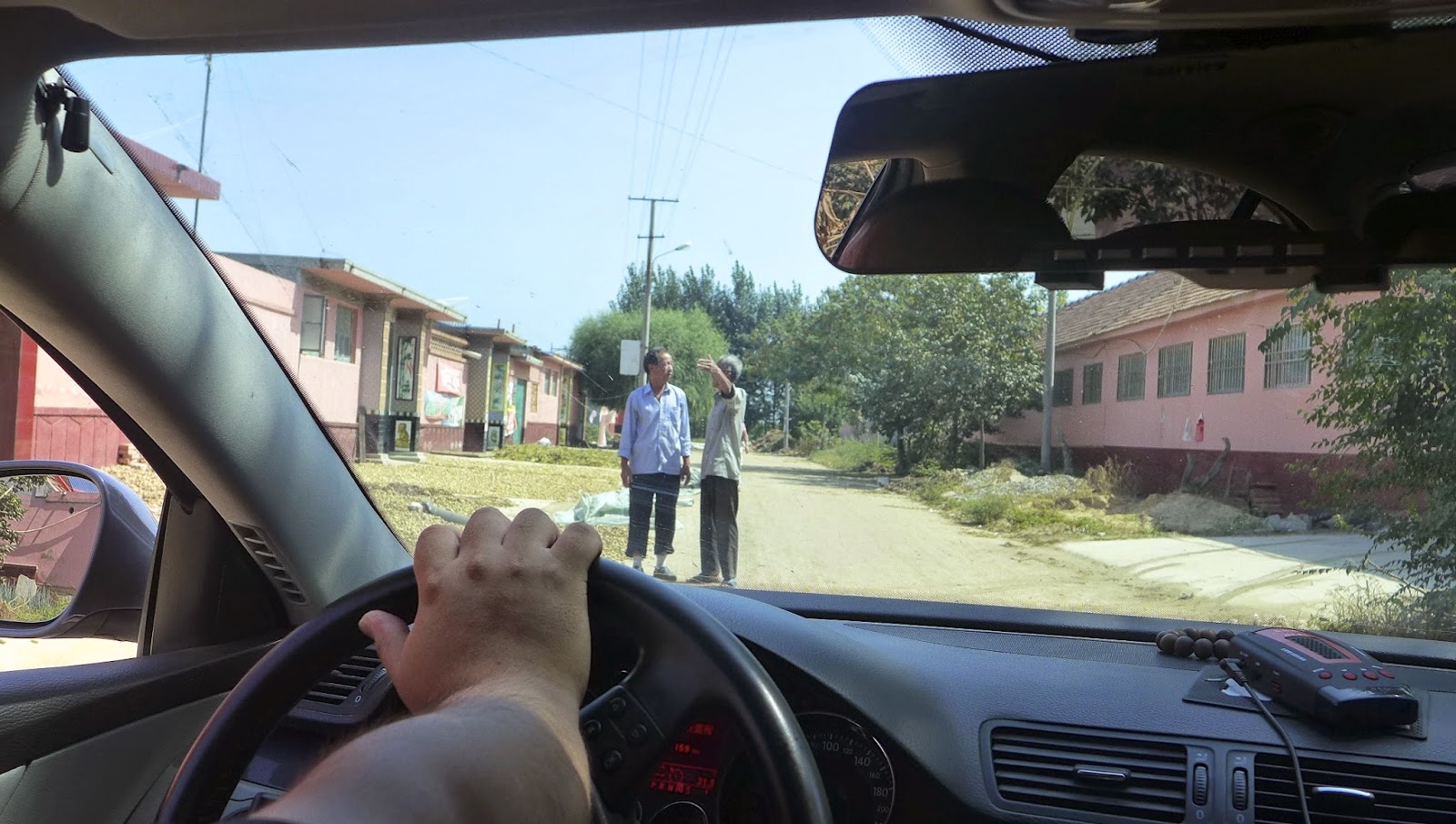 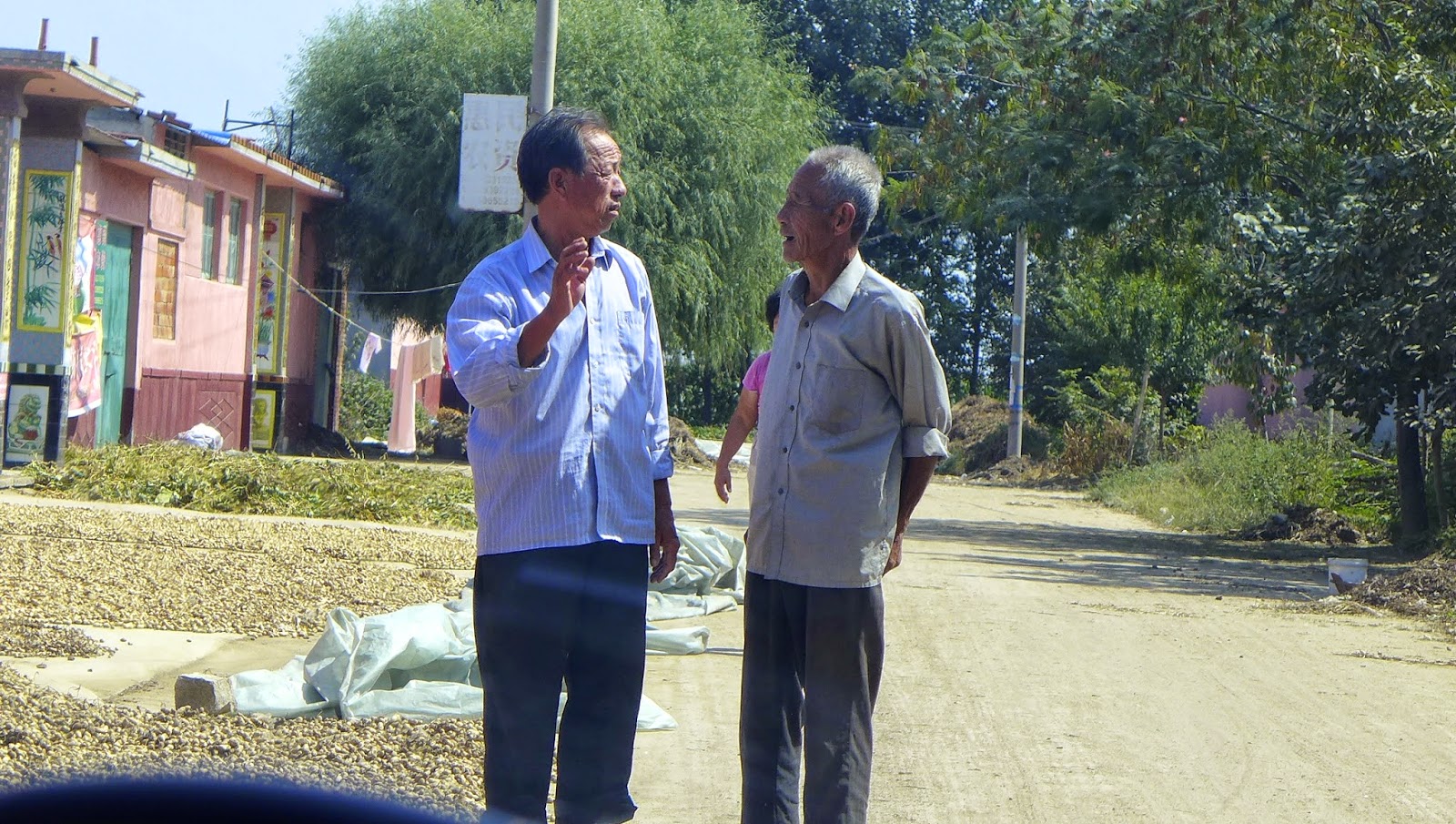 The guy in the blue shirt - we'll call him the Chinese doctor for now - didn't know Wypoh or her father. But he did know someone else who may be able to help us, an 89-year-old man named 李學圣.

When Gupoh heard that name, she gasped, "He is my cousin!"

In the above video, the Chinese doctor takes us to meet 李學圣.

After the initial greetings, 李學圣 tells us that a) Wypoh's BROTHER used to live here before he died, and b) one of his sons is still here! That makes him Mom's first cousin, her 表弟, and thus my 表舅.

His nickname is "Big Ocean", and Mom had met him once before in Harbin in 1982. But she had no idea that anyone had moved back to the 老家 in Pingdu, so she was absolutely floored!

Now this is where things get really crazy -

As seen in the videos above and below, Gupoh had asked the Chinese doctor to write down both 李學圣's contact details as well as his own. But when she saw what HIS name was, she exclaimed,

The Chinese doctor is her first cousin on her father's side!

Let me see if I got this straight:

We are at my grandmother's village. Mom just learned that her first cousin - whom she met once before in Harbin 32 years ago - now lives here, and Gupoh found TWO first cousins on my grandfather's side whom she's never met, even though she only lives two hours away!

When they said that everyone in 李家樓 had the same surname and was related to each other, they weren't kidding!

We learned later that it wasn't uncommon for people from the two villages to marry each other. Gupoh's mom was from 李家樓 and her dad was from 馬丘村, which is why she has cousins here from both sides of her family. The mother of the 89-year-old was also from 馬丘村. In fact, it was SHE who introduced Wygoon and Wypoh!

In hindsight it makes perfect sense.

But at the time, holy smokes was it surreal and confusing!

Footnote: Gupoh insisted to know everyone's names, Chinese characters, phone numbers, addresses, and whatever else she could get out of them. But because of Parkinson's Disease, she had the Chinese doctor write everything down in her little notebook for her. I couldn't help but notice that he kept writing, and writing, and writing! He tried several times to hand the notebook back to her, but she was like, "No no, you need to keep writing." It was hilarious!